NR contributes to an international research project called SAIGUP. SAIGUP is an abbreviation for: Sensistivity Analysis of the Impact of Geological Uncertainties on Production forecasting in clastic hydrocarbon reservoirs. It is funded through the Energy Project ENK6-2000-20073.

The purpose of the project is stated as... 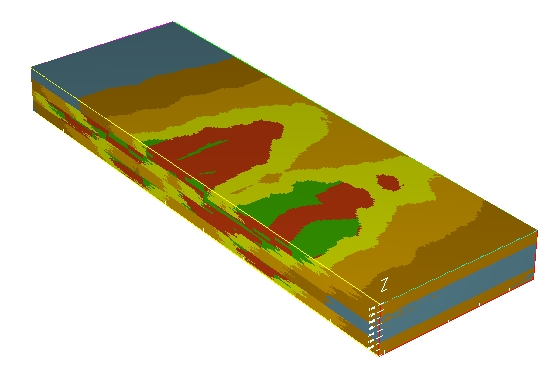 The boundary between two facies is characterizing the level of the sea at a certain time. Through the different ages the sea level would increase and decrease. The sediments are in general deposited when the sea level is increasing. When the sea level decreases there are no sediment deposition, but the sea could then affect the appearing shoreline, which again could cause the creation of a barrier.

A shoreface petroleum reservoir is bounded by faults and geological horizons. In addition, there exist important faults and barriers within the reservoir. Modelling a reservoir (with its faults, barriers and petrophysics, etc.) is important because we need to estimate the reservoir volume and deciding the position of the wells so we can maximise their production.

Facies modelling is used to separate facies whose flow properties (determined by their petrophysical characteristics) are very different. These values are important when we try to estimate the production capacity of the reservoir. To model the five facies of the SAIGUP reservoir it was chosen to divide the reservoir in four zones, each zone having a separate set of parameters. We have also added horizontal flat barriers between the zones, which represent a reduction in the flow in the vertical direction.

NRs role is to set up a mathematical model and the experimental design to test the parameter correlations. This model is based on existing methods (mainly developed by NR) for the modelling of facies belts, channels and petrophysics, but also a new method is developed by NR to model the barriers in the reservoir.

The synthetic reservoirs have been generated on the basis of how present shoreface depositions are. In the figure below three different morphologies are shown, that also is included in the SAIGUP project. To the left there are a predominantly tidal behaviour, the right is river dominated while the middle is a combination of these. Three satellite images are shown together with a synthetic SAIGUP reservoir that incorporates the main feature of the real analogue.

Four different sedimentological and three different structural parameters have been systematically changed. In addition, four different well configurations have been applied to all combinations of these parameters. Every combination has then been run through a flow simulator. This has enabled a possibility to link the input variability to the production uncertainty. Also a detailed analysis of different choices of rel-perm upscaling have been a part of the study.

The results have been used to establish a database that links the production responses of more than 32500 reservoirs with the input parameters.