The aim of this study has been to model the stacking of mouthbars and clinoforms in fluvial deltas using the Roxar RMS software. We have a used a combination of the RMS functionality like object modelling, truncated Gaussian fields and IPL scripting to create a model on mouthbar and clinoform scale. This modeling workflow has been developed and tested on the Panther Tongue outcrop data from Utah. The study was initiated and financed by Statoil and the RMS workflow and resulting model are Statoil proprietary. 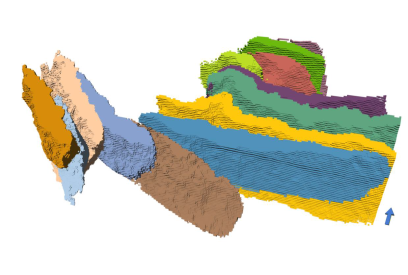 13 Mouthbar modelled with RMS based on the Panther Tongue data. Each color represents a mouthbar.

A fluvial delta forms where a river meets a lake or sea and the sediments carried by the river are not redistributed by tidal currents or wave action.  Current velocity decreases rapidly when the river enters open water and the loss of energy causes sediment deposition in front of the river mouth. The deposits take the form of clinoforms which build upmouthbars. Within each clinoform, the sand quality deteriorated as we go seawards. There can also be shale drapes between clinoforms representing periods of low sediment input but these are typically eroded in the proximal end.

The model workflow developed in this project is split into three main parts; first it creates each mouthbar objects, then models several clinoforms within each mouthbar and lastly it divides each clinoform into three facies. One of the challenges with modelling mouthbars and clinoforms s is that they typically are below seismic resolution.

Each mouthbar is modelled with an object model based on input well data and mouthbar geometries are given as user input. The mouthbars are created individually, but we correlate the dip between each object and use a rejection-sampling workflow to make the mouthbars drape on top of each other or have a geological realistic overlap. 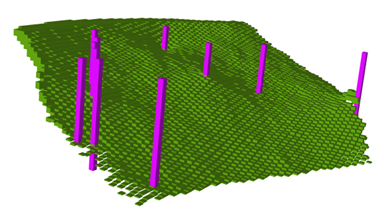 One mouthbar shown with wells it is observed in.

The clinoforms are created by subdividing the mouthbar objects into smaller regions that stack ontop each other in a compensational manner. The clinoforms can also display prograding, aggrading or retrograding stacking pattern.

Vertical cross-section in mouthbar showing the distributed clinoforms. Each color represents a clinoform.

Cross-section of one mouthbar with three clinoforms (light blue, green and dark blue) in a retrograding system.

Facies are distributed in each of the clinoforms based on intrabody trends, which are then divided into three facies. Volume fractions from wells are used to ensure proper proportions of each facies.

Shale draping is an additional feature in the model. Here a thin layer of shale is distributed between each clinoform layer.

Cross-section of a mouthbar with three clinoforms (light blue, green and brown) and shale draping (red) between each clinoform.

The advantage of detailed modeling is to represent reservoir heterogeneities at various scales that influence reservoir connectivity and flow properties.